MERIDEN — Madeline Germe didn’t anticipate she would become class valedictorian when she entered Platt High School as a freshman.

But when Germe crosses the graduation stage to receive her diploma this month, she will do so having earned the top spot in her class academically with a 4.83 grade point average, making her valedictorian for the class of 2021.

“I always set high standards for myself. And I always wanted to work hard, and do my best on every assignment. The culmination of that led me to be valedictorian, which is surreal,” she said. 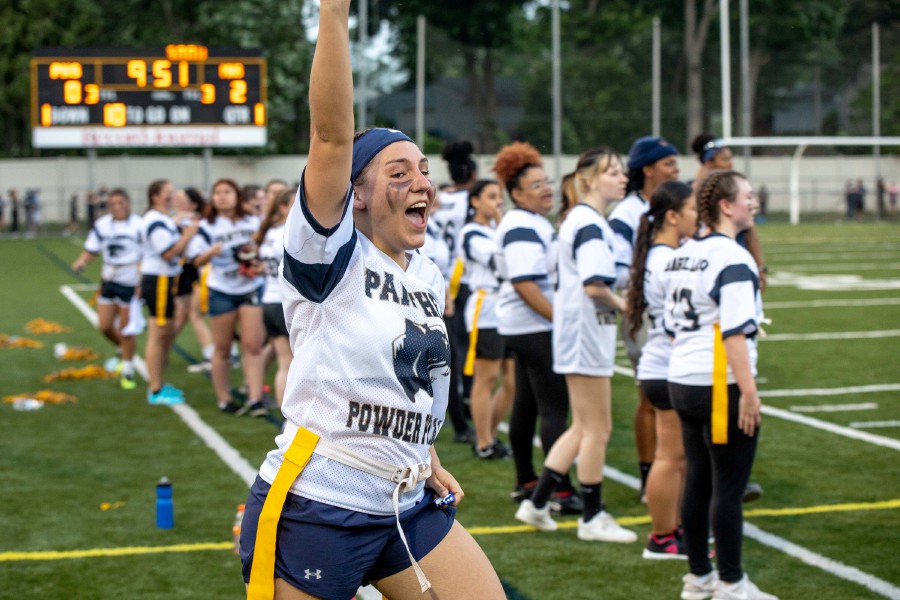 The day the Record-Journal interviewed Germe happened to be the same day the Platt Panthers squared off against their cross-city rivals, the Maloney High School Spartans, in the latest edition of their powder puff flag football rivalry.

So Germe sported her Panthers jersey. She had attended all the practices this spring. She was ready to line up on Falcon Field should her number be called.

Germe pointed to her older brother, Cameron, as an inspiration for her own educational journey. He was Platt’s salutatorian two years ago. He now attends Yale University.

The 18-year-old will head to Storrs in the fall. Germe said she hasn’t settled on a major, but is leaning toward speech pathology and may pursue a career in special education. Both of her parents are educators. Germe described them as inspirations as well.

“My parents were always pushing me to do my best,” she said.

Germe said she had taken a number of classes at Platt, including human development and family studies, which also sparked her burgeoning interest in the teaching profession.

While Germe may speak modestly about her academic achievements, her teachers are not surprised.

Corey described Germe as a student with “tremendous maturity” driven by a “holistic pursuit of knowledge.”

“What I admire most about Maddy is she works really, really hard, and when she knows she’s worked hard, she just has confidence in herself. She knows that she did what she could do. To me that’s very rare. You don’t see that very often. You see a lot of ambitious kids who are never happy with what they do,” Corey said.

But determination and ambition are not Germe’s only traits. Corey said compassion is another.

During her time at Platt, she was involved in numerous clubs and a member of her school’s volleyball team all four years. In fact, this year she was named by the Connecticut Interscholastic Athletic Conference as one of Platt’s two scholar athletes.

“I’m not surprised she’s a valedictorian,” said Adam Viviano, Platt’s head volleyball coach. Viviano described Germe as “one of the sweetest people” he ever met and “one of the nicest players I ever coached.

Viviano recalled in his first year coaching at Platt he started as coach of the junior varsity squad, of which Germe was a member.

“She was one of the first players in the gym,” Viviano recalled. She was also the first to say hello.

Germe didn’t just participate in sports. In addition to the Climate Action Club, she was also a member of Educators Rising, a club meant to inspire students to pursue careers in education.

Germe described Corey, her social studies teacher, as a mentor. She said she is grateful to her other teachers and to her guidance counselors at Platt, noting that this particular school year had been “especially challenging” because of the COVID-19 pandemic. Platt, which had been open all school year on a hybrid schedule that alternated in-person and remote learning days, never switched to full-remote learning.

“I’m just so grateful to Platt and how we’ve been here all year, every other day,” Germe said.